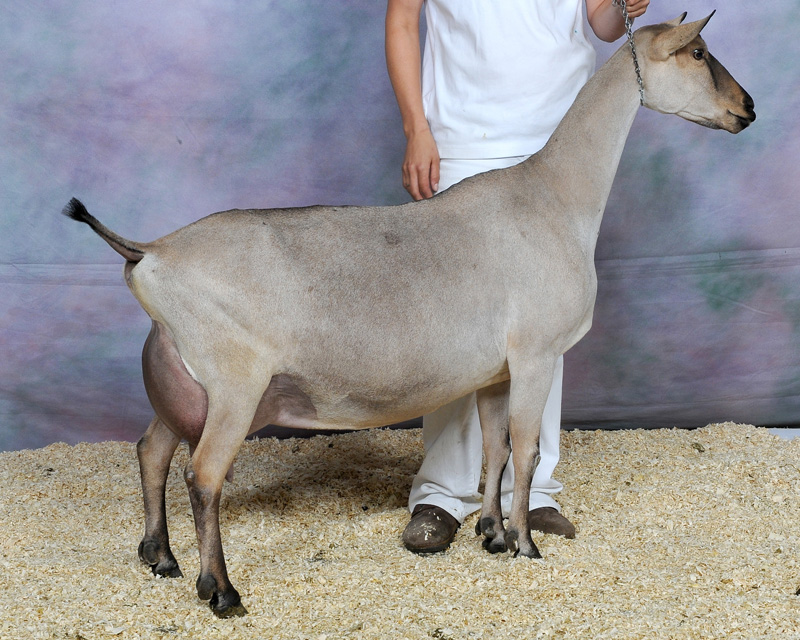 Scarlett was living proof that some does take a little longer to develop into top show winners. Always in the shadow of her classmates Sebastienne(Seabass) and Sass as a younger doe, Scarlett blossomed in 2010 and was a last minute addition to the trailer heading to the National Show in Kentucky. Our only Alpine over four years old on the trailer, she got really sick on the first day of travel. We were concerned if she could even make the entire trip, much less be presentable on show day. With a miraculous recovery, and the moment of a lifetime, Scarlett would stand in the shadow of another no longer, and became the ADGA National Champion!

Scarlett was a very smoothly blended doe, that excelled in strength of pasterns, and length of neck and body. She also had a beautiful mammary system that had great extension to the fore udder with a lot of area of attachment. Dairy Strength was her strongest feature with exceptional bone, pliability of skin, and overall angularity. Scarlett showed tremendous milk production as well as having strong components with a lifetime butterfat average of 4.0%.