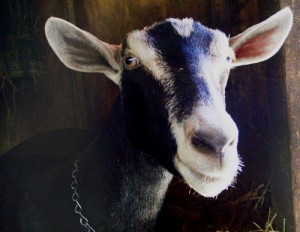 All of our goats at Redwood Hill are special, but every once in a while, a certain individual will come along and grab everyone’s attention. From the experienced goat breeder visiting Redwood Hill Farm who exclaims “WOW!!” when they see her gliding around the barn, to the third grade student that very same goat befriends by coming up and rubbing her gently on their back, as if saying, “Love me”.
Meet Rima, the American Dairy Goat Association’s (ADGA) 2012 National Champion and Best Udder Alpine.
Rima combines the strength and sweetness that her maternal family line, Redwood Hills Zimba is known for, and the style her sire, Shining Moon X-Rated, is gaining a reputation for. X-Rated sired four age class winners at the 2012 National Show and was named Premier Alpine Sire of Show! 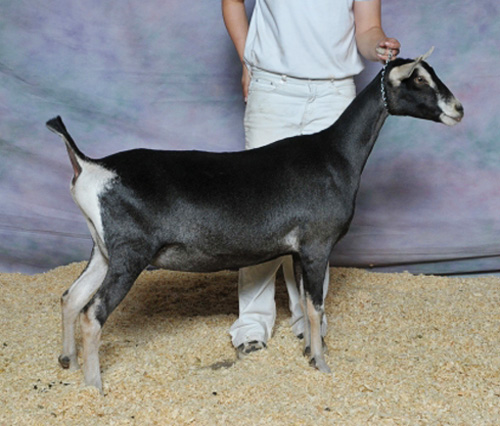 Rima as the Alpine Junior National Champion in 2009

2012 was not Rima’s first time at an ADGA National Show. In 2009, Rima went to the National Show in Sacramento as a junior yearling. She won her age class and was then named the Junior National Champion for the Alpine breed. It was evident that we had a special one here. That fall, we repeated the breeding of her mother, Raindrop, to X-Rated. In the Spring of 2010, Rima’s full sister, Redwood Hills Drop of Rain was born. Rain was awarded first place two year old at the 2012 ADGA National Show. 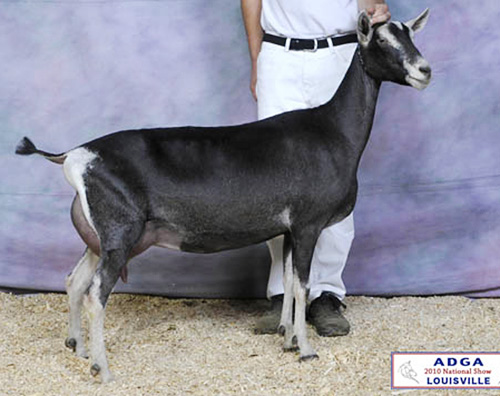 In 2010, Rima and about twenty five herd mates made the long trip to Louisville, Kentucky for the ADGA National Show. Rima freshened with a beautiful mammary system and earned the first place ribbon in her age class at Nationals once again! Former Redwood Hill employee and alpine breeder Ben Rupchis handled her in the show ring that year. I recently asked Ben his thoughts about working with Rima, and he responded: “Rima is joie de vivre in caprine form. She was a charmer the moment she freshened as a yearling. Her infectious optimism and cheerfulness–always expecting and appreciating extra attention and goodies–brightened chores on even the rainiest of spring mornings. In the parlor, after milking she would turn on the stanchion in hopes of a hug and scratch on the withers after being milked. She is always among the first to inquisitively wander over to see what treats you may have brought her either in the barn at home or at the show.” 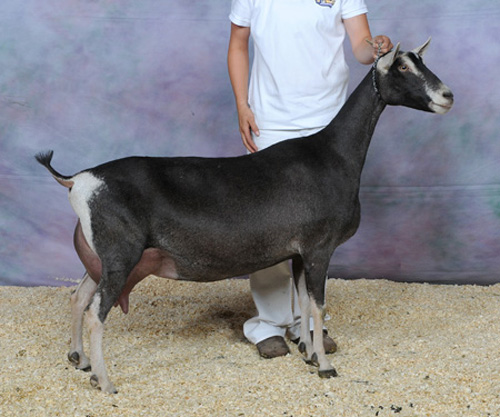 Rima is the 2012 ADGA National Champion and Best Udder Alpine

We did not attend the 2011 National Show, as Massachusetts is a bit too far for us to travel. This year, ADGA held the National Show in Loveland, Colorado and we began our trip out there on July 4th. This year was different, as we traveled in a “goat caravan” with four trailers of goats and multiple California herds. One thing was the same as our last trip, Rima was attending and looking great. She won her age group once again, this time as a three year old. When all of the age class winners came in for the selection of Senior Champion, the air was thick with tension and the field deep with competition. Rima, as usual, carried a look of confidence and a carriage of grace in that final lineup.
We were overwhelmed with joy as she was then named Senior Champion and then ADGA’s 2012 National Champion and Best Udder Alpine. 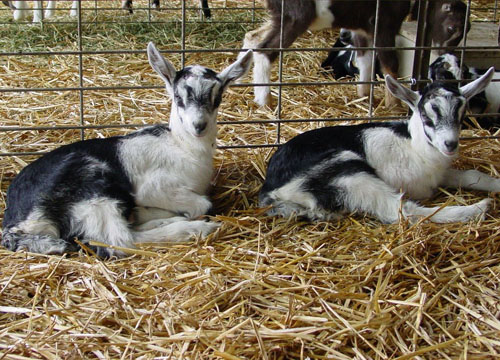 If that wasn’t exciting enough, we were thrilled as we heard Rima’s 2012 born son, Redwood Hills Snapple Resonate, was just accepted into this years Spotlight Sale in Boise, Idaho! The Spotlight Sale is a live auction held annually at the ADGA National Convention and is the culmination of a week full of everything goat. Only a few nominations are accepted into this prestigious sale and we are very proud of this boy and his potential as a herdsire!
Redwood Hill Farm Herd Manager Trinity Smith had this to say about our newest National Champion: “Rima is the quintessential dairy goat. Full of personality. Any person is drawn to the sparkle in her eye, and her radiating curiosity. She puts milk in the bucket better than most, and reigns as one of the barn queens. Now with multiple National Show wins, she is quite sure she should monopolize all human attention that is offered. Simply put she combines the work and play of life as well as any other goat out there!”
Rima has given us at Redwood Hill Farm so many special moments in such a small amount of time. Her family line is known for outstanding longevity, so hopefully this is just the first few chapters in an outstanding novel!